Seamus Kraft, Executive Director of the OpenGov Foundation, joined us on Tuesday, April 12, to discuss how to make legislatures work better in this digital age. 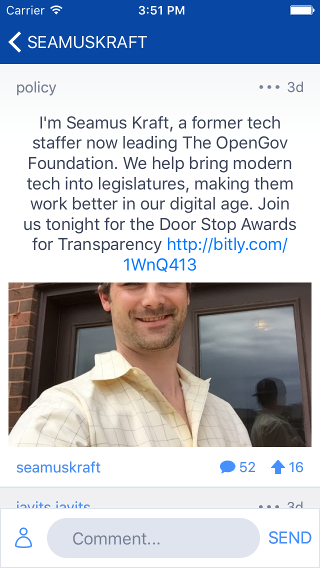 @record318: Hi Seamus! Do you think the Hill is technically challenged because the members just dont want learn new things? Or is it something else. I think it is something else. It's a paper-based workplace, w/ paper-based processes, and little incentive for long-term planning. In my experience, Members will use what works and what they can afford out of shrinking MRA.

@surging.santorum: Dear SeaMasterKraft, what are some awesome projects you're working on to make our lives easier? Building off last year's #Hack4Congress magic, we are now forming a team of some of the top technologists in the USA to work with you and current Congressional tech staff to help solve your problems using better tech, data, software and updated rules/procedures. Stay tuned….

We have right now software for you to create and crowdsource legislation called Madison. It gets more eyes, more exposure, more input on the bills you and your boss are working on. Plus, you can start to include constituents in your legislative work w/ minimal lift. If you want to take your bills and legislative work into the Internet Age w/ Madison, email me Seamus at opengovfoundation dot org. It's open source and $0 cost.

@record318: Show a Member a better, faster, and cheaper way to do the same (or more) work, and they'll use it. My fear is that when we do catch up to what everyonr else is doing there will be something new again. How do we that evolve quickly as an institution level? That’s true. I don't think Congress, or any Govt organization for that matter, will ever be up to the second. But as a House tech veteran likes to say, "we are 20 years behind. let's get to 3-5 years behind. You'll be amazed at the improvement.”

But I think you need to look at what US Digital Service and 18F are doing in Exec Branch as a good model. If you've got small, dedicated and empowered innovation teams on it, you'll be able to bring in or build ridiculously useful and cheap software and tech tools.

@sonofsam.ward: Hey Seamus. Why is it do you think that state legislatures seem so much better about posting committee hearings and Bill transcripts online and doing so in a more intuitive way? I'm thinking specifically about MD's system. MD's system? Post a link please cause that'd be (good) news to me. In our experience, Congress is actually pretty much at the front of the pack for MOST legislative data. On state level, NY is the best we have seen. But those types of info need to be just as open, accessible and useful as what you see at congress.gov.

@trillion: Wait, seriously? How is Congress possibly AHEAD of the pack? Check out xml.house.gov. That might not look sexy, but it's unbelievably transformative. What The house clerk's team, Library of Congress, GPO, etc are doing with open legislative data is an untold success story. That's what tonight's door stop awards are all about. You should come.

It begs the question though: if Congress can innovate its leg data, why isn't it doing the same to how you correspond with constituents or do research or run committee hearings/markups? The answer is $$$ and staff. But just a little spent right (see xml.house.gov) goes a loooooooong way.

@jr.hebert: What are the most ridiculous paper based operations you've seen in a legislature? What's the most archaic, backward crap we still have here on the Hill in your opinion? The most ridiculous thing I've seen in a legislature is 15+ "state changes" for each version of each bill. You print, walk down the hall, date/time stamp w/ a machine, then it gets retyped, printed, checked by hand, hand-written edits, then retyped, then printed, then scanned...over and over.

The second most ridiculous thing is that most legislatures don't even have control of their own laws and legal codes. Private vendors do. And two of America's most powerful cities are getting held hostage. Bad scene. I recently spoke about this: http://bitly.com/1Vm0uPG

@morrow.fish: Hey Seamus, what's the single biggest tech/IT problem facing Congress today? The biggest problem is how Congress spends-or doesn't-on tech and digital tools, staff and services. Second is procurement, which is related. Tech is critical infrastructure of our personal lives, and everything else EXCEPT civic and Congressional work lives. That's gotta change.

@f*$k.sjl: Please fix the outdated appropriations letter system. Every member gets a PIN. They give that PIN to whoever they want to be able to sign on in their name. I know, right? There are tons of other ways to authenticate a human than signing a physical piece of paper. That brings us back to lack of long-term planning and shrinking staff capacity and resources. If you and your boss ask for it and push for it, you'll get it.

Or how about when you get hired. Why do you have to essentially apply 3, 4, 5 times, instead of your info following you around, like when a college student shows up for the first day? There's so much wasted effort, errors, headaches with things like that. Enormous opportunities for innovation.

@trillion: Based on your experience, what should we be pushing our bosses for? The biggest thing to ask them to push for is bigger MRA, plain and simple. Second is procurement and vendor rules that make sense. There's no reason Congress can't do what USDS and 18F are doing at the other end of Penn Ave. choice and competition in what you can buy and use. Shoot me a note and we can help you and your boss: seamus@opengovfoundation.org

@f*$k.sjl: Larger MRA's is a pipe dream while the Republicans are in he majority. They would all get primaries. Half of the country legitimately thinks that Members have too many staff and that they are overpaid.  Someone has to stand up and tell the truth: Congress is losing its ability to fulfill its constitutional obligations. You can't possibly expect better outcomes and more productivity from Congress if you keep cutting and cutting and keeping it a paper-based institution.

And for the budget hawks, look at how Congress spends its $$$ now. What are you getting for the $200,000,000+ going to tech and digital? You want to serve better and spend less taxpayer $? Let's talk about free and open source software, creating a digital service dedicated to innovating every day.

@f*$k.sjl: You are overestimating how much the American public gives a shit about facts. Most of them think foreign aid is a significant portion of the budget. They think governing just requires some common sense. Communication tech has given them just enough information to be dangerous. It also has created readily accessible echo chambers. Everyone is scared shitless of getting primaried. With better tech, bigger and smarter MRAs, and more staff, Congress can and will save money in the near, medium and long term. It's do or die time. If you care about Congress and its role in America, now is the time to do something about it before a healthcare.gov-style meltdown happens.

All good points. I believe that The best politics is good policy and constituent service. If you have world-class tools and teams to do that, you won't be nearly as scared of a primary challenge. But right now, your opponents can and are driving Ferraris to accomplish their goals, while Congress sticks you with a sweet 1984 Corolla. Guess who is gonna win that race?

@webb.mcgrath: What did you do as a tech staffer? Not a lot of those around. I started with basic web development, graphic design and video production. That grew to building internal and external-facing tools that made our lives easier as staff, got our work/message out way better, and involved citizens in our legislating, investigating, hearing, etc. I was lucky to have a little bit of budget and a boss/team who created space for us to experiment, test new approaches and improve what we were doing. That was the key part.

@children.dicker: What was the coolest part about working for Issa? What's the office like? It was a blast working for someone who let us innovate and had our backs 100% when, inevitably, someone told us "No, you can't do/use/try that." Liberating and empowering as hell. We got to show up and make stuff happen with an exceptionally smart, kind and hardworking guy at the helm.

@wee.lumpkin: Do you miss the Hill? I do sometimes, but I don't miss the fur-flying insanity, the partisan fighting for fighting's sake, and the constantly increasing workload and constantly shrinking lack of help/resources to do it. That equals burn out. Which breaks my heart.

I'm lucky to still be in and around Congress somewhat often, helping to fix challenges Facing staff & helping amazing folks working to modernize Congress from the inside, in an overwhelmingly challenging environment. Every time I walk around the Hill, it feels great to be an American. 

@seamuskraft: I’m signing off. Thanks for the awesome questions, stay in touch and come party with us tonight at The Door Stop Awards 530-7 PM: http://bitly.com/1Ms3BT4