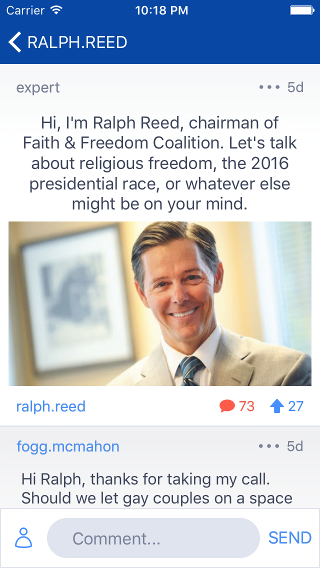 @cameronpig: What's next with Trump? The immediate priority for Trump is to unify the Republican party, build bridges to the Congressional and gubernatorial wings of the party, raise money (and lots of it), build a grassroots infrastructure in key battleground states, and begin laying out the positive and contrast themes of the general election.  That’s a lot for any campaign to do, but all these tasks are critical for Trump.  The good news is he is already highly competitive in the general election polling and the Democratic presidential contest remains fractious and unresolved.  He has time, but not much.  The next 90 days are critical.

@horsey.wofford: Also, I'd love to hear your thoughts on Hillary Clinton. I think Hillary Clinton is both a deeply flawed candidate and highly formidable in the general election.  Like Al Gore in 2000, Hillary is simultaneously a poor candidate and a strong candidate.  She is a poor candidate because of her failure to connect with voters, the sense among many voters that she is dishonest and untrustworthy (a view that will be strongly reinforced by the extremely damning State Department Inspector General’s report that found she violated the Department’s email policies and violated the Federal Records Act), and her inability to communicate a compelling positive case for why she should be president.

Yet she is also formidable because she is a ferocious competitor (just ask Barack Obama who barely defeated her in 2008), she would be the first woman president (which will be appealing to some voters), and she and her husband are prodigious fundraisers.  Their political network has no rival in the modern political history of the country aside from the Bush family network.  As we saw in the primaries, that was no guarantee of victory for Jeb Bush, and my sense is that Hillary is very vulnerable to defeat in November (and yet will be a strong nominee as well).

@hallway.meeting: Mr. Reed, how excited are you that you basically predicted the 2016 election in your book Dark Horse? I am stunned that much of the plot of Dark Horse, which I published in 2008, has come true in 2016. Some of what I predicted in fiction also came true in 2008 when Barack Obama became the first African-American presidential nominee and Sarah Palin became the first woman vice presidential nominee since Geraldine Ferraro. Palin even experienced some of the challenges and media criticism that the fictional vice presidential candidate suffered in Dark Horse. It is really quite eerie, and yet not so, since almost every scene and line of dialogue in Dark Horse really happened. I’m not a kiss and tell kind of guy, so rather than write a memoir I took some of my experiences working on multiple presidential campaigns and told them in highly fictionalized form. All the characters are composites, but some of the meetings and conversations all happened to me in different campaigns. In this case, fiction was in some ways truer than real life. Thanks for noticing, and I hope some of the rest of you will take some time to read Dark Horse. If you’re a political animal or interested in politics, I promise you’ll love it.

@leviathan: Thanks @ralph.reed. In American discourse, "religious freedom" usually means the right to enforce some private prejudice in public venues or having government enforce it by law. Can you explain to me why it never means more freedom to clothe the poor or feed the hungry? Actually it does mean that.  The Little Sisters of the Poor minister to the elderly, the sick, and those facing death.  Theirs is a ministry of compassion to the suffering.   The Obamacare mandate force their religious order, made up of celibate nuns (many of whom were beyond the years of reproduction) to subsidize providing medication to their employees that caused abortions and sterilization and violated their religious beliefs.  Rather than simply provide free contraception to those who wanted it, the government forced religious ministries and parachurch organizations to do so.  This violated the First Amendment and the Religious Freedom Restoration Act, which was cosponsored by Ted Kennedy and Chuck Schumer.

Ironically, the nuns would have been exempted from the regulation had they only cared for Roman Catholics.  But because they served the public and tool all comers, they were forced to violate their conscience.  Ninety percent of the homeless shelters in America are run by churches or faith-based organizations.  The same is true of many organizations assisting the poor.  So laws and government actions that violate the faith of these ministries ultimately undermine the very organizations that do the most to help the poor, the unemployed, those lacking a quality education, and the chemically dependent.

@locke.bell: Follow up to your response on the little sisters, do you think American workers should be dependent on their employers for health care? Probably not, but it has become a feature of our economy at this point and I don’t want to remove that incentive for employers.  The employer provision of health insurance is largely an accidental byproduct of the wage and price freeze that the federal government instituted during World War II.  Because private sector employers could not increase wages, they sought instead to attract the best employees with generous benefits, for which they sought (and received) a tax deduction.

We should make health insurance tax deductible for consumers as well as business to level the playing field, and remove as much as possible the mandates for coverage that drive up the cost.  The most affordable insurance is a catastrophic policy combined with preventative care with a Health Savings Account.  Those premiums are lower and more affordable.   So give the same tax deduction to individual policies that we currently give to those provided by employers is my best advice.

@congressionaldm: The faith and freedom coalition took issue with the Obergefell decision, saying that the 14th amendment should not protect the right to same sex marriage. Does the 14th amendment protect marriage rights at all? Do you think that the Loving v. Virginia case was decided incorrectly as well? I do not believe there is a Fourteenth Amendment claim to same-sex marriage because the institution of marriage presupposes procreation and the nurture and socialization of children.  Only a man and a woman united in matrimony can perform that social function.  I would have to go back and look at the Loving decision, but my sense is the issue was different because it involved race rather than gender.  An African-American man and a white woman (or a man and woman of any racial or ethnic background) are by definition of their genders capable of carrying out the essential procreative and enculturating functions that are at the heart of marriage.  The only basis for denying them marriage could be racial discrimination, which is forbidden by the Fourteenth amendment.  The same cannot be said for two men or two women in a union.  They not only lack the procreative function, but there is a growing body of social scientific research that indicates that the parenting styles and abilities of men and women are quite different.

Fathers and mothers play distinct and separate if complementary roles in the development and socialization of children, and that is why the state has a compelling interest in recognizing and protecting marriage as a union of a man and a woman.  This demonstrates that the state interest in protecting traditional marriage can be for reasons of procreation, socialization, and enculturation of children, not the anti-gay animus that the majority opinion in Obergfell falsely alleged.

As for gays and lesbians, prior to Obergfell many states had already legalized same-sex marriage (13 states by referendum or statute) and many other states (around 15 or so) allowed for civil unions that granted many of the same rights and privileges of marriage to gays.  Instead of resolving the issue, Obergfell has only inflamed and further politicized the issue, just as Roe v. Wade failed to resolve the abortion issue and insured that the abortion wars continue to play a role in national politics 43 years after the Court, in a deeply flawed opinion, alleged a Fourteenth Amendment right to “privacy” that included the right to end the life of an unborn child.  These matters are best left to the people and their elected representatives to resolve.

@archer: Why do you believe that government officials should have the right to discriminate against those of different faiths? Actually, I don’t. I believe in the First Amendment, and I do not believe in the government establishing a church or religion. I do support freedom of expression and the right to express one’s faith free from government restriction or control.

@locke.bell: What's your red line for government regulating religion, at one point is it okay for a government to say "no you can't exercise this particular religious practice?” There’s no simple answer to this question, as it depends upon the case before a court and the facts of the case.  But the short answer is religious can be infringed only when there is a compelling and overriding state interest that allows it.

Another example is regulations forbidding facial hair in some prisons because of a need to insure that beards are not used to hide weapons.  While some adherents of some faiths object to shaving, there is a compelling state interest for safety in a prison or jail that takes precedence.  In the absence of a compelling state interest, religious belief and expression should always prevail as a matter of law.  If we infringe on the freedom to express religious belief, then what freedom is safe in our society?  That is why the founders included it in the First Amendment they ratified to the Constitution.