Benny Johnson of the Indepedent Journal Review joined us on Thursday, March 31 to discuss how he makes politics go viral every day. 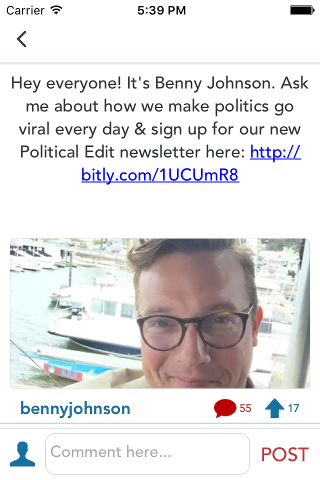 @dawes69: Hi Benny, can you give the "For Dummies" version of what IS making politics go viral? Virality is *not* defined by Justin Beiber or Kim K. Vitality is saturating your target market. If you know your audience, and they are clicking, you're viral. Here's an example: Every year we do the Running of the Interns. My target market for that piece is a greater Capitol Hill audience. Approx 100K people. That piece gets approx 100K clicks every year. Not the most click we will get on a piece that week, but our perfect target audience, so viral!

@wee.lumpkin: My boss does boring shit all day. How do I make that viral? Can I just come Periscope your boss all day? I bet people would watch.

@andy.harris: Benny, you should start a series of videos where you interview members of congress doing shit that has nothing to do with their jobs. Like Better Know a District type meets Kim Jong Il looking at stuff.  I agree. Amazing idea.

@babelincoln: Is it necessary to have all social media accounts (i.e. Instagram, Twitter, FB, snapchat) to make your boss known? No. Over saturation on social is silly. Just because a platform exists doesn't mean you have to be on it. Find your strengths and do what your boss is most natural at. Booker & Grassley on Twitter is a great example.

@megan.brent: Do you think Rand Paul's use of Social Media and the Internet is the future of campaigning? Not sure about that. Can you point to something Rand did that deeply broke through for you this cycle?

@megan.brent: Rand's live stream had around 400,000 views. I think that's awesome and was totally unique. I went to Haiti with Rand and respect his work ---> http://bitly.com/22Sy5Fc I also hung out with his old wheelbarrow last night: http://bitly.com/1VVYKvt

@vp.vip: What do you think is your best work? And do you have a link to that? Would love to read it. It was pretty cool to have ABC's Scandal do a shot-for-shot recreation of my Machine Gun Bacon piece last week: http://bitly.com/1VVWoNa

@donaldtramp: What kind of snacks do they have at buzzfeed?

@richardgirth: Tramp, he's at IJReview now. Not sure about snacks but they always have puppies there. I took most of the snacks with me from BuzzFeed, I'm not sure if they ever restocked? At IJR (this is happening as we speak) we have pizza sized donuts in the office. Wish I could attach a picture.  they are massive. PROOF of the pizza sized donuts: http://bitly.com/1VVVK22

@sunsetcruz: Benny, do you feel like buzzfeed is the future of journalism?   Also how hard was it to lose @buzzfeedbenny. I have always been @Bennyjohnson. The other name was the Twitter display name. You can change that and keep your followers :) Though, I have considered @IJBJ in honor of the new outlet. But I think I'll just keep it at Benny

@richardgirth: Why do you continue to defend Michelle Fields? She clearly is all about getting attention and has made false accusations in the past. There is overwhelming physical evidence that Fields was physically grabbed by Lewandowski. I think that is deeply inappropriate for staff, whatever your gender, orientation or outlet. Also deeply wrong what happened to the TIME photographer

@hawkins: As a reporter, what kind of staffer can you simply not stand to deal with? The self-important ones. Here are my classifications of every type of Hill Staffer. Do you agree? http://bzfd.it/1VVX6K9

@mozart.was.a.red: Benny, when can we expect the official launch of the YOLO caucus? I'M DOING THAT!

@horsey.wofford: Best tricks for getting onto the The Hill’s 50 Most Beautiful? Horsey, I would actually direct you to the 'Cutest on the Hill' list, which is the only list that we can all agree on. http://bitly.com/1UvkFdi

@bennyjohnson: Thanks for all the questions everyone! This was awesome. Thanks for reading:  Also, expect me to ask your boss this question soon: http://bitly.com/1SCaIaF