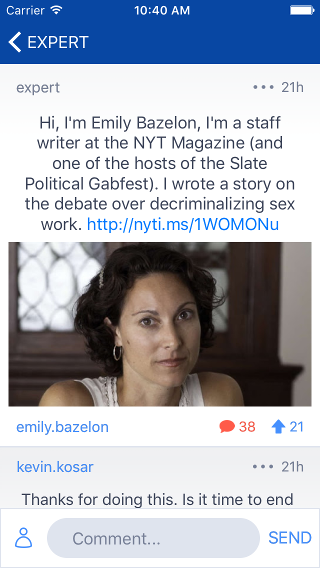 @staff.dates: I've always been particularly bothered by teens being convicted for prostitution and being treated like the criminals instead of the adults paying to rape them and the pimps profiting off of it. I realize this is a very difficult topic to talk about publicly though. What can be done? Treating teens as criminals/prostitutes rather than victims is one area in which state law is beginning to shift. Over 1/2 the states now have safe harbor laws, like NY's, which make exactly this distinction for juveniles, funneling teens toward services rather than jail/probation/criminal record.

Here's a sad case that sex workers highlighted last winter, especially on the blog titsandsass: Last winter, Latesha Clay, a 15-year-old girl in Grand Rapids, Michigan, appeared in a Backpage ad that listed her as underage. When two men responded, she let them into a hotel room where a pair of older male teenagers, 17 and 18, robbed them of $650 using an Airsoft pistol. The men were not charged for soliciting sex with a minor, but Clay and the male teens were charged as adults for armed robbery and unlawful imprisonment. Clay pled guilty and was sentenced to nine years in prison.

Why do you think it's hard to talk about? I actually think it's one area in which the anti-trafficking movement, plus the science on adolescent brain development, has helped change people's consciousness.

@staff.dates: It's tough to talk about in Congress because I don't think Members want to be associated with "crime" like this, and a lot of folks don't acknowledge that it's an important issue. The optics seem lose/lose here. Oh right, that makes sense. At the moment the politics play in favor of cracking down on trafficking. But you know that for all the federal money going to trafficking prosecutions, the number is very small nationwide, like in the low hundreds if I remember right. And a substantial number of those cases involve some "victims" who see themselves as consensual sex workers. Don't get me wrong: trafficking is a terrible social ill. But the image of women in chains, or held captive in a locked room--that is relatively rare, advocates like Rachel Lloyd at GEMS in NY and Andrea Powell at Fair Girls in DC told me. They work w/ girls and young women, many of whom are court-mandated to receive exit services. And what they see are more frequently are relationships between the girls and their pimps that seem exploitative from the outside, but that the girls don't define that way. So "rescuing" them often isn't the answer. This stuff is HARD and yeah I get that it's hard to talk about.

Here's a bit from my piece that got cut:  Each year the fight against sex trafficking draws tens of millions in government funds and donations inside the U.S., as well as hundreds of millions worldwide. The money doesn't often go to services, like housing for teenagers leaving abusive homes or foster care, which 70 percent of Fair Girls clients have experienced. “When you’re trying to move forward, you need an apartment. You need to go to school,”a trafficking victim told me. Recently, the director of Fair Girls, Andrea Powell, noticed that a 20-year-old she’d worked with for months had posted a new ad on Backpage. “I talked to her and she said, ‘I’m making $1,300 a month at CVS. My rent is $800. I need the extra cash,’” Powell said. She looked upset. “I didn’t really have an answer for her.”

@wee.lumpkin: Which lawmakers have been the most willing to wade into this issue? I don't know anyone in Congress who has worked on decriminalization. There's a city councilman in DC and one in NY who have talked about it.

Congress's latest move was the Justice for Victims of Trafficking Act, which makes the crime of buying sex from a victim equivalent to to trafficking itself. The maximum sentence is 99 years in prison. No one I talked to who works with teens or adults who want to exit sex work thought this law was a good idea. A couple of advocates told me about girls who'd been arrested for holding money for their pimps, which the advocates saw as a misfiring of the law

@locke.bell: No offense, but you seem like an unlikely person to get involved in prostitution policy. How did you stumble into this story? Ha yes well I seem to specialize in complicated legal stories with no clear answer. Bonus points if there's a tie to a dispute within feminism, or about sex or gender.

Heather had been attacked by a male client, managed to take his gun, and kill him. She was traumatized AND she hated sex work from the beginning. She was doing it to support a drug habit. Matisse was trying to help her exit. All of that seemed interesting to me, and started me on my reporting path.

@spendingtaxpayercash: Out of the 55,000 prostitution arrests a year, do we have any idea how man of those were of consenting sex workers vs non-consensual? It depends how you define consensual. The vast majority of those arrests didn't involve trafficking charges. That's a separate BJS category, and a tiny fraction of the whole. But no one polled those 55k ppl & asked: Are you doing this voluntarily?

That's a super important unanswered question. I don't know of any good research on it in the US. I did cite a study about it from India: In one study in 2011 of >5,000 women across India, only 3% said they were "forced" into the sex trade, only 10% said they freely chose. The rest fell into a gray area in between, giving reasons related to poverty or issues like domestic violence or desertion.

So it really depends what you mean by "voluntary". What are the other options people in sex work have? What if it's prostitution or McDonalds, as Deon Haywood, the head of the New Orleans Women With A Vision, put it to me? It is that a real choice, and maybe more importantly, if that IS the choice ppl face, do we stigmatize them for choosing sex work, and believe them when they say they're making a choice with their eyes wide open? Or do we assume as many abolitionists do that's a matter of false consciousness, or there are very few women in this category, or something else that minimizes the extent and self-awareness of this group? Those are really hard questions.

@bell.fogg: Legalizing weed sounds like a sure thing compared to legalizing prostitution. Why do you think that is? What do you mean a sure thing -- like it's clearly better policy wise to legalize marijuana, but for prostitution it's murkier? To me, the really interesting questions are about implementation. I don't know enough about how things are going for legal pot in CO or WA. Are there lessons from those states that could inform the debate over how to change US prostitution laws? Or is this mostly apples and oranges?

I really don't know, but I'd love for some smart researcher to go think about it :) I'd also love for some law and Econ types to sit down and game out what kind of regulatory scheme has the best chance at decriminalizing prostitution without increasing the harms of the sex industry, i.e. Trafficking & underage prostitution. Is it New Zealand's law? Would that translate in the US, or is our country just too different from a small island nation?

@morrow.fish: Fascinating story, @emily.bazelon -- acknowledging that we aren't going to legalize it over night, what first steps would you like to see congress take on the issue? How about more money for kids exiting foster care? I found it so upsetting to learn that 70 percent of the girls at GEMS and Fair Girls had experienced the foster care system. We are really really failing those kids. Let's take the money we spend arresting ppl for consensual sex work and put it toward services for them. And how about funding research to answer some key questions: How many sex workers are there in the US? How old are they? How many freely choose or were forced or are acting out of economic duress or because of something like domestic violence? Who ARE these people and what are their life circumstances? We know they span a spectrum, but believe me we DON'T know how many fall into what slice of that spectrum. No matter how many times a group like CATW says that almost all women are forced, it's a made-up claim. I don't think I've ever tried to report about a subject w/ more sketchy claims of fact and questionable data. It was crazy: Every time I poked at a number to see how solid it was, it fell apart on me.

@atherton319: I don't get why you'd decriminalize something that is so closely associated with drugs and violent crime, and sexual violence. In any situation. Criminalizing any behavior or activity drives it underground. The argument Amnesty and Human Rights Watch make is that the best way to REDUCE the drugs, violent crime, and sexual violence associated w/ prostitution is to bring sex work ABOVE ground, and then attack those problems. The sex worker groups say that sex workers and some of their clients would report violence and trafficking to the police if they weren't worried about getting arrested for consensual stuff. Your question seems to assume that decriminalizing prostitution would increase the bad activities associated w/ the sex industry. The evidence from NZ and Australia suggests that to the contrary, decrim helps clean it up. Now maybe that wouldn't happen in the US. But why not -- what's the argument or the evidence that we wouldn't see similar benefits? No one says decrim is perfect. There would still be evils in the sex industry. The question that matters is what laws do the most to reduce harm and make the lives of vulnerable ppl better, right?

@emily.bazelon: Hey great questions, thanks everyone for being so thoughtful. I'm going to sign off now -- bye!