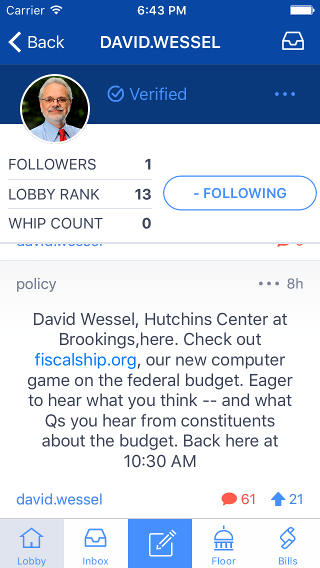 @high88: Without endorsing any specific candidate, who has the most interesting plan to address federal debt? The most interesting fiscal development in the presidential campaign has been on the tax side: Sanders'' carbon tax, Cruz's subtraction-method VAT, Rubio's version of the X tax. See http://blogs.wsj.com/washwire/2016/02/29/with-little-fanfare-the-2016-campaign-is-producing-a-serious-tax-debate/washwire/2016/02/29/with-little-fanfare-the-2016-campaign-is-producing-a-serious-tax-debate/

@im.serious: Mr. Wessel, you mentioned a carbon tax. Do you have any opinion on Rep Delaney's bill HR2202 the tax pollution a not profits act, and its proposal to use revenues from a carbon tax to lower the corporate tax rate? I haven't looked at the Delaney carbon tax bill. I will. I don't think America is ready for a carbon tax. I predict we'll have one in some form before 2030

@im.serious: Why don’t you think America is ready for a carbon tax? Just politics? Do you think a cap and trade program would be easier? Would it be the better option? 1) there's not yet a consensus that we have to do something soon about climate change; yes, it's politics  2) there's an aversion to any "tax" 3) cap/trade is a reasonable alternative, but less efficient. Better than nothing .

@f.sjl: Can deficit reduction occur when Members are pledging to never raise revenue? Cutting waste alone will not reduce the deficit in any meaningful way. I doubt that Congress will ever be willing to restrain spending sufficiently to put the budget on a sustainable course without some revenue increases.

@printguyredux: Do you think negative interest rates could work in the US? We're learning a lot about negative rates from the experiments with negative rates in Europe and Japan,  not all of it encouraging.  I hope we don't get to the point where negative rates are necessary, but I think it's going to be on the table if we need more stimulative monetary policy. For Ben Bernanke's musings on negative rates, see http://brook.gs/1TbcPA1

@superstaff: Hi David, what do you think the single most wasteful item is in the federal budget? And how can we help to change that? That's hard. We'd all like to get rid of waste, fraud and abuse but there's no line item for that. We won't put the budget on a sustainable trajectory if we pretend we can do it by eliminating waste. That said, in a book I did on the budget (Red Ink, 2012), I picked on the National Dam Safety Project.

@f.sjl: What is your opinion of a VAT tax? It seems like a tax that will just be more cumbersome to those that spend most of their income. A simple straightforward no-exemption VAT is regresssive, hurts those who spend all of their income. Yes. But there are ways to adjust a VAT or to couple with a (smaller) income tax to offset that effect.

@sonofsam.ward: Hi David. How can regulatory structures keep pace with technology-driven financial innovation? How do you address regulatory and agency overlap? Also What's your take on finance being the way it is because of culture/"market color" vs actual structure & policy? In financial regulation, the biggest obstacle to reducing overlapping jurisdictions and too many rule-makers is Congress. The only reason Dodd-Frank didn't consolidate federal financial regulatory agencies (e.g. Merge SEC and CFTC) is because the committees of jurisdiction wouldn't go along.

Keeping our regulatory apparatus changing as fast as technology changes is a big challenge.  There are really interesting conversations going on about 'fintech' and about ways to balance the need to protect consumers without stifling innovation (or entrenching the dinosaurs.) Check out the 'regulatory sandbox' approach of the British Financial Conduct Authority.  http://bitly.com/1SMAGvB

@long727: Welcome! Someone posted your brookings video on student debt here - really interesting! Did you look at data on bad outcomes other than default? Ie, four-year degree students who are underemployed who may be able to make loan payments but are stifled economically by six figure debt for decades. There was a lot more information in the paper underlying that student debt video -- including data on earnings.  Search  BPEA + student loans + Adam Looney for more

@jr.hebert: The 24 hour news cycle doesn't leave much room to make sacrifices today in order to achieve a more sustainable budget in the future. Is this the same dynamic we see in our inability to address climate? Is the 24-hour news cycle a cause or a symptom of the problem? Communications technology/social media is a tool. A wise leader could use it to pursue and sell policies that he/she thinks would serve the country well.

@f.sjl: Improvements in communication technology is the number one reason we can get nothing done here. Every member has to be wary of being primaried to their left or right. I agree that every member has to be worried about being primaried from the left or the right, and that's a problem. I guess we need some members who are willing to 'do the right thing' even if it threatens their reelection

@f.sjl: Humans are naturally self interested. We can rise above it occasionally but not consistently. Why do we expect politicians to be any different? Humans are self-interested, yes. Humans also are altruistic.  Humans also care deeply about how well their children and grandchild will live: That's part of our evolutionary success.

@david.wessel: Folks, I've got to go. Play www.fiscalship.org. And after you play the game, let us know what you think.