David Boaz, author of the Libertarian Mind and Executive Vice President of the Cato Institute, joined us on Cloakroom for an Expert Q&A on to talk about the role of Libertarianism is Congress today. 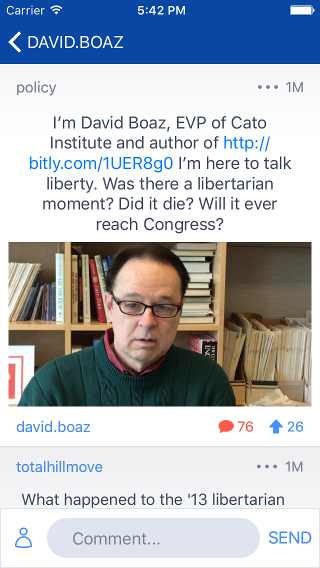 @doug.stamperer: Hi David, thanks for doing this. Let's assume Clinton and Trump are our nominees. Whose worse for Liberty and what do you do to stop them?  (And what policies make them worse). That’s a really bad choice. But probably Hillary is a firmly statist politician, while Trump actually has no respect for constitutional and political norms. I fear him more as a threat to the republic than for his barely discernible policies. Do about it? Try to stop him (and her) in the primaries.

@f.sjl: Is pure libertarianism a realistic ideology? Don't libertarians in politics somewhat arbitrarily decide which freedoms matter to them more? Pure libertarianism? Well, I wrote a book (The libertarian mind) on my vision of libertarianism. I think a rule of freedom except where you interfere with other people works well. And certainly the more libertarian existing countries are, The better they work. So I think we could push further.

Arbitrarily? Well, everyone has their own interests and preferences. No one can spend all his time on every issue. But a lot of libertarians may focus more on economic issues than issues of personal freedom.

@totalhillmove: What happened to the '13 libertarian revolution?  Was it over estimated or did it die? I'd say the libertarian moment was overhyped. But the tea party, marijuana, marriage, and out rage over surveillance all do show growing libertarian tendencies.

@sam.ward: David, assume Hillary is elected president and you find yourself briefing her on one big bold libertarian idea for her to pursue in 100 days. What do you think would be the most persuasive policy proposal to pitch? Hillary seems the least amenable politician to a libertarian pitch. Can't imagine pushing Social Security reform, or a restrained foreign policy. So I'd go for criminal justice reform, including asset forfeiture, 1033 reform, and ratcheting down the drug war.

@sam.ward: Second question, same scenario trying to brief a President Trump, what do you think he'd be receptive on for a libertarian policy proposal to push? I have no idea what trump’s preferences are. So what to urge? A big tax cut, maybe. Maybe criminal justice reform. And  maybe a more coherent critique of foreign intervention.

@sam.ward: David, what do you see the role of Cato in the DC libertarian ecosystem versus other centers like Mercatus or Niskanen? I don't want to make comparisons between Cato and our friends at other libertarian organizations. I would solicit your thoughts on that.

@leviathan: If I don't value freedom/liberty as an overwhelming deontological good and if I'm generally more concerned with welfare maximization (broadly construed), what does libertarian thought have to offer me as I think about how to best advise my boss? No deontological commitment to liberty? For shame! But we know from economic theory and history that free markets work, and socialism, centralization, and regulation work less well. Libertarian economistdon't make deontological arguments. They examine the results of taxes, regulations, prohibitions, etc.

@f.sjl: How would you pitch a libertarian approach to economics as a solution to the issue of economic inequality?  Inequality itself doesn't bother me much. Poverty does. Free markets are the best cure for poverty. Also, government should stop engaging in crony capitalism and regressive regulation. Stop redistributing upward.

@federal256: David, how so you suggesting a libertarian approach on items that don't have a natural market but may be necessary for defense? There are a few public goods, like national defense. Probably fewer than most people think. But for Defense we need government, and some inefficiency and politicization will be inevitable.

@thomas.jefferson: Was Ron Paul so popular in the 2012 presidential race because of his charisma/personality, because of his views, or because he was the anti-establishment candidate? And what does a future candidate need to do to replicate or build upon the elder Paul's success? I think it was Ron Paul's views on smaller government and staying out of war, combined with his quirky nonpolitician personality (sort of like Bernie Sanders). A candidate who seems more "normal" – governor, senator, not over 70 – could hopefully take that message further.

@f.sjl: Where do you draw the line on regulating the market? On regulation, I'd like to draw the line at regulating things that infringe on other people's rights. But Regulation magazine publishes 50 articles a year, with much more nuanced analysis.

@sam.ward: It seems like libertarianism spends a lot more time and energy on courting conservatives than liberals. I find folks like Brink Lindsey and Will Wilkinson and Tim Lee very appealing to leftists, but they don't get as much attention. Why? Ask the liberals! But I think one reason is that so much of American politics is organized around economic issues such as taxes, spending, and regulation. Therefore conservatives see libertarians as allies  disagreements, while Liberals tend to see us as adversaries, despite our view of ourselves as liberals who understand… with a few disagreements

@wholistic.thinker: Do you think libertarian policies in general is better suited for rural/low population density areas and are not practical in urban areas? It's easier to avoid conflicts with other people in rural areas. But libertarianism or classical liberalism really emerged with the emergence of a more urban and capitalist economy. So I think rules that respect rights, protect property, and allow cooperation to flourish are especially important in urban areas.

@malcom.tucker: Hey David, do you think that freedom and liberty are synonyms and can be used interchangeably when talking about government/ideology? Philosophers may think freedom and liberty are different. I'm a simple country boy from Kentucky, and I use them interchangeably. Maybe liberty sounds a little more legal, while we use freedom in a more general context.

@mozart.was.a.red: David, what do you think about the libertarian case for Bernie Sanders? There’s a bad libertarian case for Bernie Sanders: "hey, he likes Denmark, and Denmark is pretty free.” I think the better case is this: sanders can't get his bad economic ideas through a Republican Congress. But he can extricate us from endless wars, and pull back on surveillance and the drug war without Congress. So actual effect might be better than you would think.

@sam.ward: David you and Cato have been big advocates in defining libertarianism among the general population very broadly and not specific to a litmus test or check list. Could a similar approach with members result in a large group of libertarian learners? I don't know. I'd ask y'all what the prospects are for moving members in a libertarian direction. Of course, we do distribute our studies to all offices, and invite staff and members to seminars.