Bill Nye the Science Guy joined us on Cloakroom for an Expert Q&A about climate change policy and to introduce his latest climate science educational video: http://bitly.com/22OeNvc 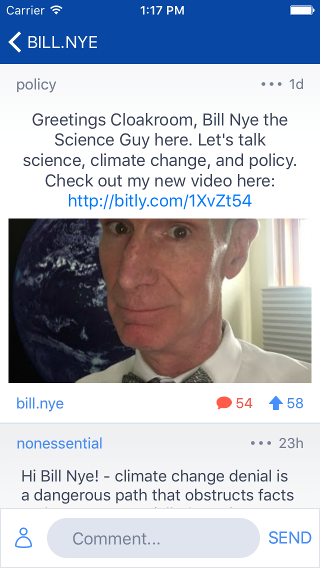 @o_martell: Bill, thanks for doing this! I was wondering, as a Republican who believes in anthropogenic climate change, what do you think I should do (as a Hill staffer and just as an average individual) to raise the importance of climate action with fellow Republicans?My understanding is that a great many Republicans are ready to hold hands and jump on climate change. Right now though, they all have to wait for the convention or an election to slide past. If this is true, see if you all can get the presidential nominees to talk about it, sooner the better.

How do we feel about a carbon tax? It has the potential to encourage investment in renewables, discourage CO2 and CH4 production, and serve as a fair tariff- all at once.

@horsey.wofford: Dear Mr. Nye, my boss doesn't entirely buy into the whole global warming story. If there was one person in the world who you think could change his mind, who would that be? Check this out. Mr. Bastardi tweeted that I stood in front of a key area of a graph. Be that as it may- his first graph spans too many years, his second too few. He hides or misses the critical 2.5 century scale causing  trouble. CO2 250ppm up over 400 now. http://bitly.com/22OeNvc

@mozart.was.a.red: Bill, do you agree with the subpoena against the Competitive Enterprise Institute (a think tank that promotes climate change skepticism)? Do you think this is a bad precedent for free speech, or a tactic that should be expanded to combat denial? http://bitly.com/1MIzUxf Resolving this issue is why we have a system of courts of law.

@stephiphopoulos: Bill, thanks for joining us. Why do you use religious terms when discussing climate issues like, "belief" or "denial"? I thought science was based around skepticism? "Science is a way of skeptically interrogating the universe with a fine understanding of human fallibility. If we are not able to ask skeptical questions, to interrogate those who tell us that something is true, to be skeptical of those in authority, then we’re up for grabs for the next charlatan, political or religious, who comes ambling along.” -Carl Sagan The words "belief" and "denial" are not religious words per se-- are they? Climate denial is largely a generational issue. How many Nay voters are under 32?

@f@$%.sjl: No one says we should ever stop questioning ourselves, Steph, but this is the consensus now.

@high88: Are you supporting Hillary even though she is pro-fracking? I'm not endorsing anyone. I hope everyone takes the environment and especially climate into account, when they vote. Be sure to vote-- on Wednesday November 9th.

@kent.dodd: #420 question for Bill Nye: does the science on marijuana justify its criminal classification under the Controlled Substances Act? To come to a position on marijuana, I recommend checking data from Colorado and Washington State. Did their new policies work or cause more difficulties in the legal system?

@bill.nye: Carry on you all. Celebrate Earth Day! Thanks for taking the time. Let's change the world…